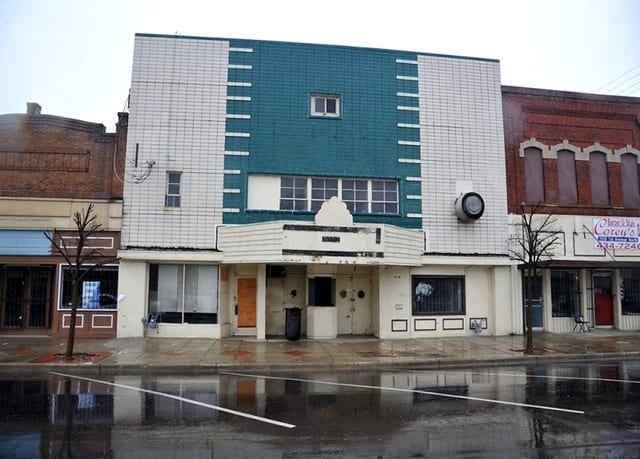 (Lincoln new) Shuttered for decades, the Lincoln was purchased in 2017 by acclaimed actor André Holland, a native of Bessemer. Plans call for the cinema to reopen in late 2020 or early 2021. Photo by Larry O. Gay.

Bessemer, Ala. — On June 7, 2019, the Lincoln Theatre received a $21,000 design grant from the Alabama State Council on the Arts (ASCA). The award will finance the creation of architectural drawings for the 71-year-old venue, as well as a design plan for the marquee, signage and façade. The restoration of the Lincoln will be the first major initiative of The Holland Project, a 501c3 non-profit organization founded in 2017 by the family of acclaimed actor and Bessemer native André Holland.

Built as a 400-seat “picture house” to show first-run movies for African American audiences, the Lincoln is the last undestroyed black theatre in Bessemer and one of only two extant theatre buildings in “The Marvel City.” Upon its grand reopening as a cinema and performing arts space, the Lincoln will show movies and provide production capacity for the performing arts, including drama, dance and music.

Growing up in Bessemer, André Holland had often studied the Lincoln Theatre — he was a regular at a barbershop on the same block as the abandoned cinema. His parents, Mary and Donald Holland, recounted seeing movies at the Lincoln as teenagers. André purchased the building in February 2017, with a vision to open it as a single-screen cinema and performing arts space.

“I want to create a space where young people can explore their interests in arts,” André says.

André Holland has extensive stage and screen experience, appearing as an actor in half a dozen films, including the Oscar-winning “Moonlight.” He has directed and performed at The Globe in London and the Manhattan Theatre Club, among other renowned venues. André will star in “The Eddy,” a musical drama currently in production in Paris, to be released on Netflix next year.

The restoration of the Lincoln will be the first major initiative of The Holland Project, a 501c3 nonprofit organization established in September 2017 by André and his family. The nonprofit also owns the nearby Albano pharmacy building, a two-story structure built in 1890 on the first lot ever sold in Bessemer. Impressed by André’s commitment to revitalizing the downtown historic district, Dr. Paul J. Albano encouraged the Hollands to establish a nonprofit organization, then donated his family’s building to The Holland Project for future development.

Mary Holland retired from U.S. Steel after 36 years as a business planner. As a lifelong resident of West Jefferson County, she is committed to providing access to the arts for children of Bessemer and surrounding communities.

“Part of our vision for the Lincoln is educational programming for Bessemer youth, designed and directed by creative professionals from Alabama and visiting artists from around the world,” Mary says.

Glenny Brock, outreach coordinator for the Lyric and the Alabama Theatre, has joined the Lincoln restoration effort as a project consultant. Family ties in Bessemer attracted her to the project, as did the venue’s unique history.

“In the first half of the 20th century, Bessemer had at least three cinemas and one drive-in for black patrons,” Brock says. “The Lincoln is the only one left.”

Following the founding of The Holland Project, Brock urged the family to join the League of Historic American Theatres (LHAT) and focus their efforts on developing the historic theatre as a community venue. The official mission of the Lincoln is to preserve, promote, present and celebrate diverse cultures with special emphasis on African American cultural heritage.

The $21,000 grant award from ASCA will be used to finance the creation of architectural drawings for the 70-year-old venue, as well as a design plan for the marquee, signage and façade.

Follow the progress of the restoration and learn more at www.alabamalincoln.com.

This project has been made possible by grants from the Alabama State Council on the Arts and the National Endowment for the Arts.